Cuckoo Wasps are a massive, possibly polyphyletic group of parasitic wasps. More than half the members of this giant family are placed in the genus Chrysis (more than 1000 species!). Undoubtedly, in the coming years this genus will be stripped, split, and reorganized in favor of a more monophyletic and phylogenetically accurate set of genera. As their common name might suggest, cuckoo wasps lay their eggs in the nests of other wasps, and many specialize on a single host species. This lovely individual appeared to be waiting outside an old nail hole on the side of my house that was occupied by a cavity-nesting wasp of some sort. 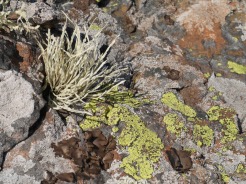