This one was a really tough ID. We found this moth during our Slater Museum moth-lighting trip in Point Defiance for National Moth Week. We gave up attempting to identify it pretty early and had to call-in help from the experts at BugGuide. But even over at BugGuide, it was tentatively placed in three different genera before we settled on Thallophaga. Western Washington University is currently attempting to create a visual key to the Geometrids of the Pacific Northwest. As soon as it gets published, I’ll let you all know!

This species of inch-worm moth is found throughout the US, except the southwest, and exhibits striking variation in morphology across its range. Males and females are also quite dimorphic. Males tend to be yellower and have dark patches at the base of their forewings while females almost always have a white ground color. Perhaps the most intriguing aspect of the morphology of this species are the horns of their caterpillars. Look for these crazy caterpillars in mixed hardwood/conifer forests in the early summer here in the PNW. 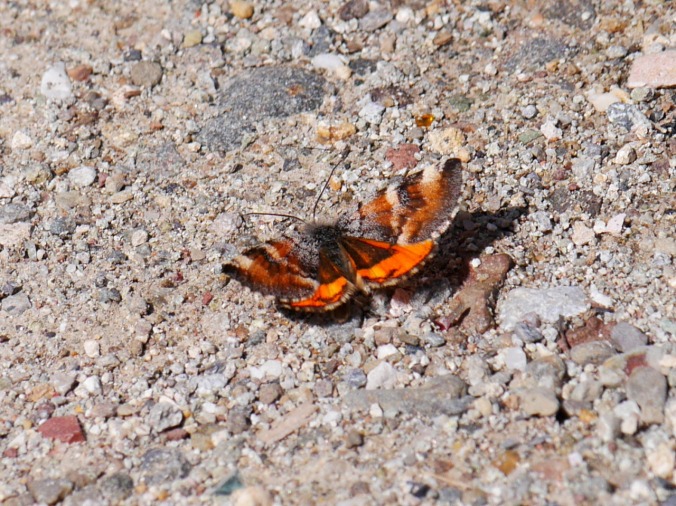 When I first saw this flashy, day-flying moth, I immediately assumed it was a skipper butterfly! Took me a while to realize it was actually The Infant, an inchworm moth (Geometridae). This species is called “The Infant” because it is one of the very first moths to emerge from hibernation in the spring. This individual was fluttering around some moist gravel, sipping up water and minerals in the sunshine. Apparently, Song Sparrows have been observed hunting Infants in muddy areas like this, because it is one of the only times the moth is still enough to be captured. The Infant is found throughout the west in areas with birch and alder, and is the only member of this genus in North America.